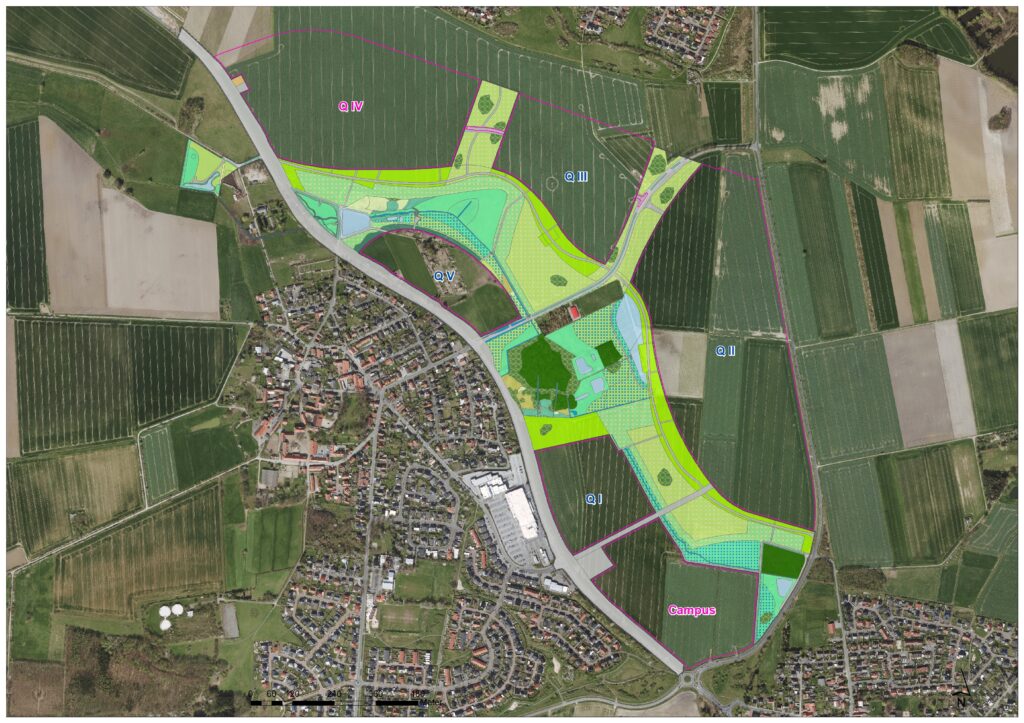 On December 16, 2020 the Infrastructural Zoning Map (Infrastruktureller Bebauungsplan: I-BP) came into effect as it was enacted through the statute on that date. Creating the I-BP, FUGMANN JANOTTA PARTNER carried out an examination of special species protection in addition to an environmental review including a community landscape plan.

As part of the Wolfsburg housing building offensive five new quarters are being built in the town’s south-eastern district of Nordsteimke-Hehlingen comprising a total of approximately 3,000 residential units – the Sonnenkamp.  The area has a 63 ha “Green Core”, which constitutes the central connecting element between the quarters. The infrastructural zoning map for the “Green Core” areas designates places for sports and local recreation, turning conventional agrarian fields into premium green areas and – especially through waterway construction – into areas with a high value in terms of nature conservation.

After 3 years of successful cooperation with the municipality of Wolfsburg we completed the Sonnenkamp infrastructural zoning map. Containing large-scale measures for complying with the community landscape plan, it is an important contribution to nature conservation in the urban development of the city of Wolfsburg. Moreover, the I-BP underlies the ensuing development plans of the Sonnenkamp. Find more information about the residential construction project on the City of Wolfsburg Homepage.

Our office also created the outline plan for the new quarters and developed the concept for the Panoramic Trail at the Sonnenkamp.