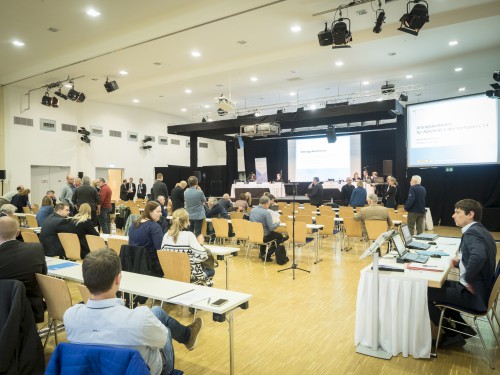 Expansions to 380 kV high-voltage overhead lines between Federal States require approval as part of a federal planning procedure in accordance with the Grid Expansion Act [Netzausbaugesetz]. Typically the first stage at which public interest groups and the general public become involved is the scoping conference, at which the approval authority, the Federal Grid Agency [Bundesnetzagentur], collects information for the investigation which is to form the basis for the procedure. At the scoping conference on 22 November 2006 for the western section of the project, titled “Grid expansion: 380-kV high-voltage line, Röhrsdorf-Weida-Remptendorf,” FUGMANN JANOTTA PARTNER presented the key findings concerning the application pursuant to § 6 of the Grid Expansion Act, which were prepared prior to the conference, and made itself available to answer technical questions from the approximately 100 participants.

Further information can be found in the press release from 50Hertz:

At the behest of 50Hertz, FUGMANN JANOTTA PARTNER has been working on the federal planning procedure for the project since August 2015, in cooperation with BHF Landschaftsarchitekten Schwerin. The plan calls for reinforcing the 380-kV high-voltage overhead line between Röhrsdorf, near Chemnitz (in Saxony), and Remptendorf in Eastern Thuringia.