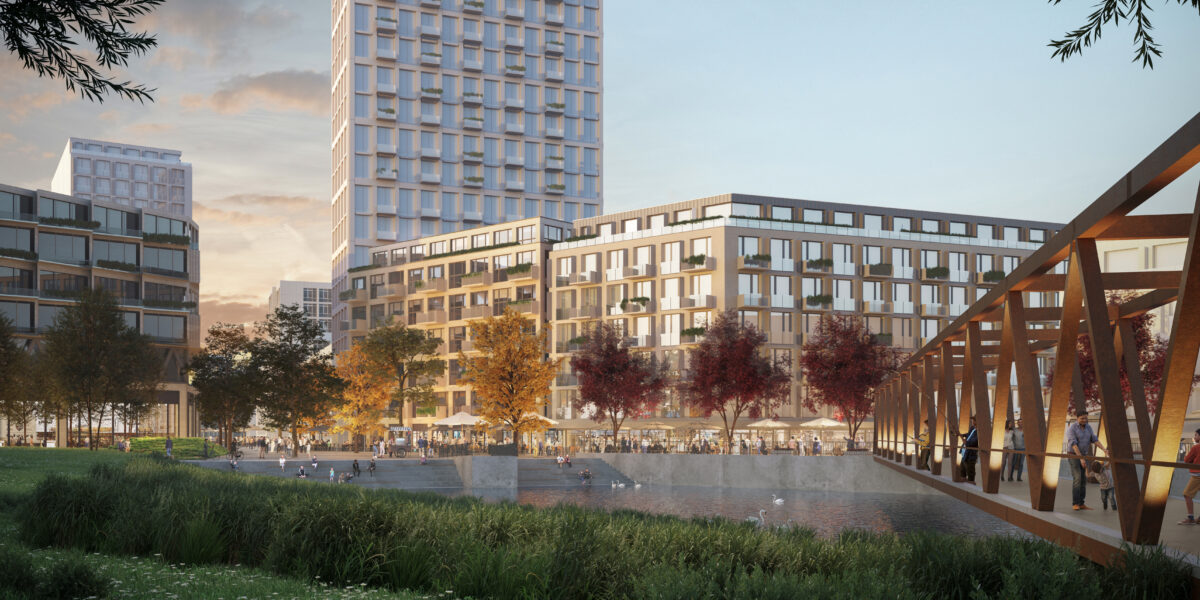 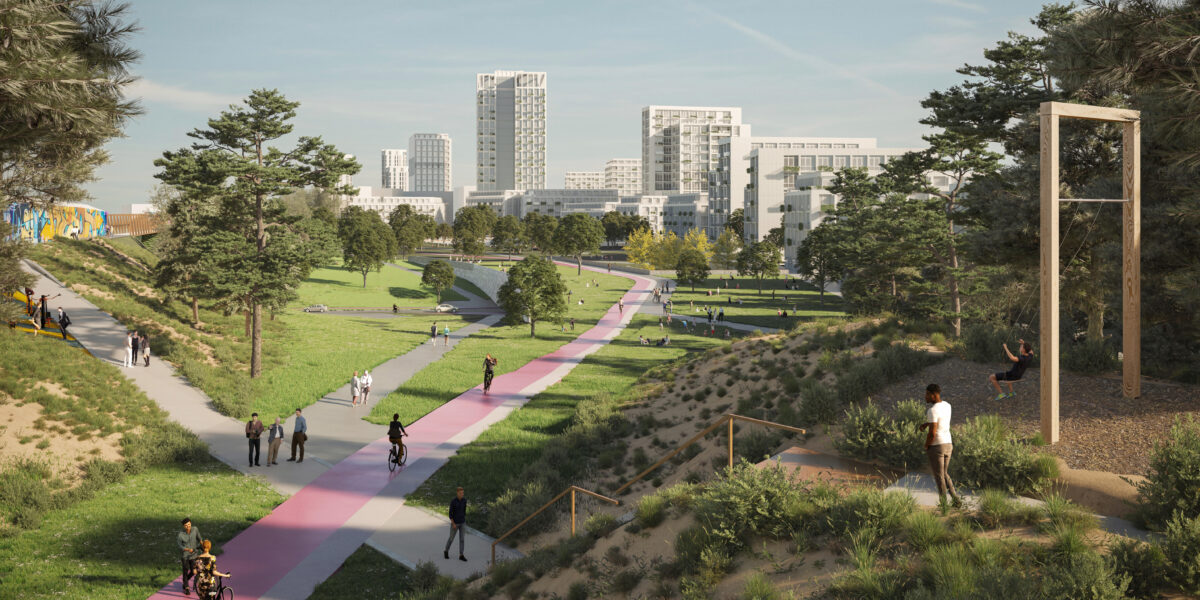 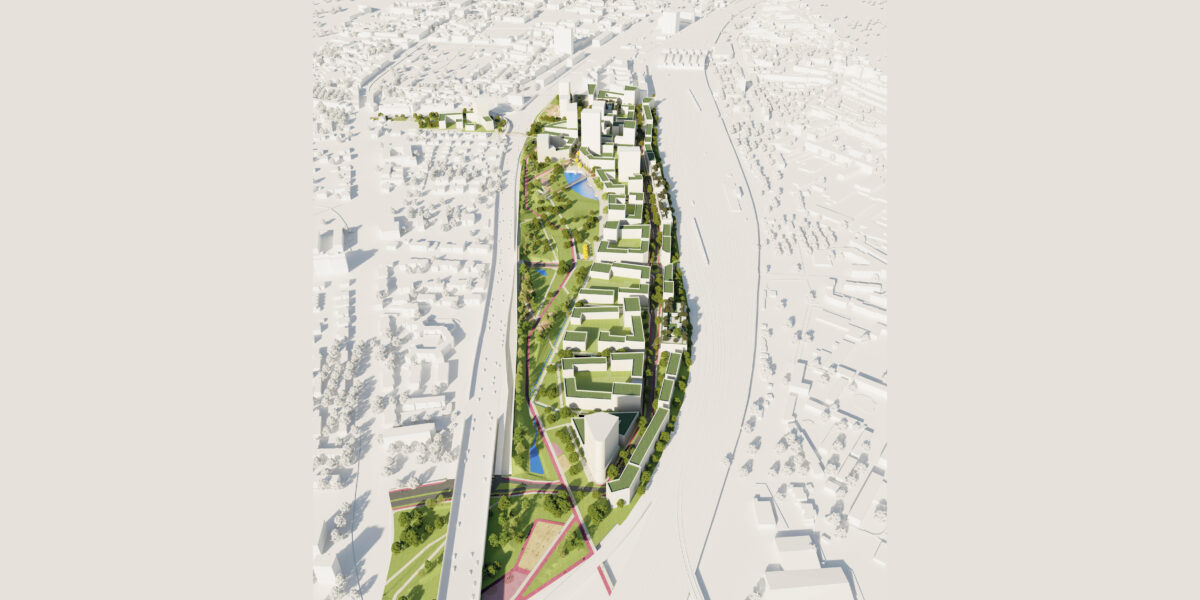 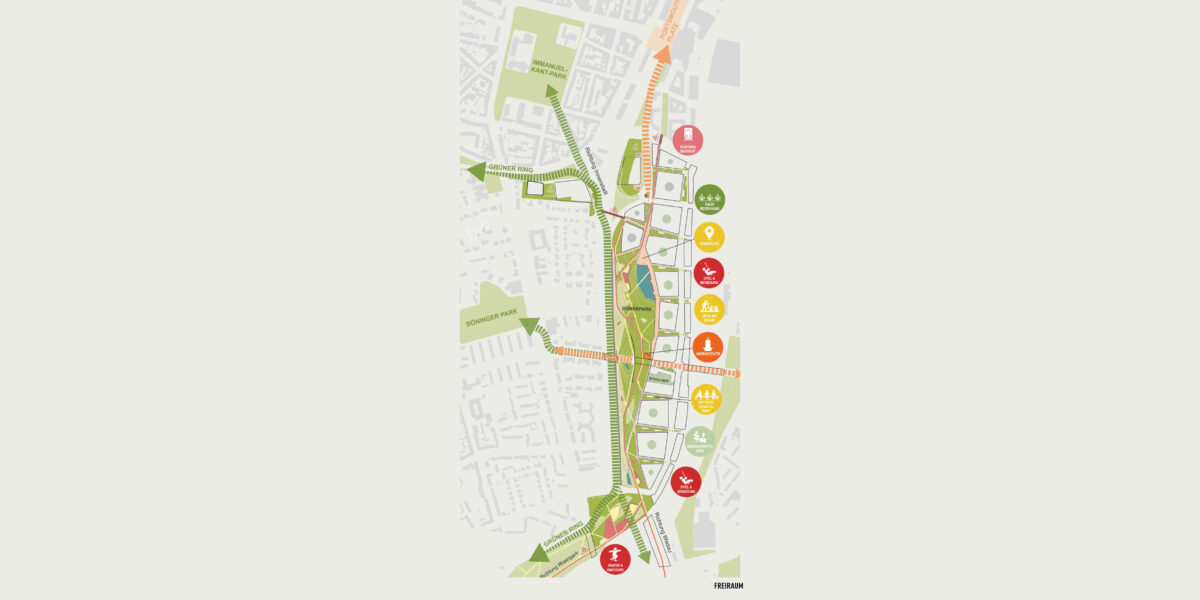 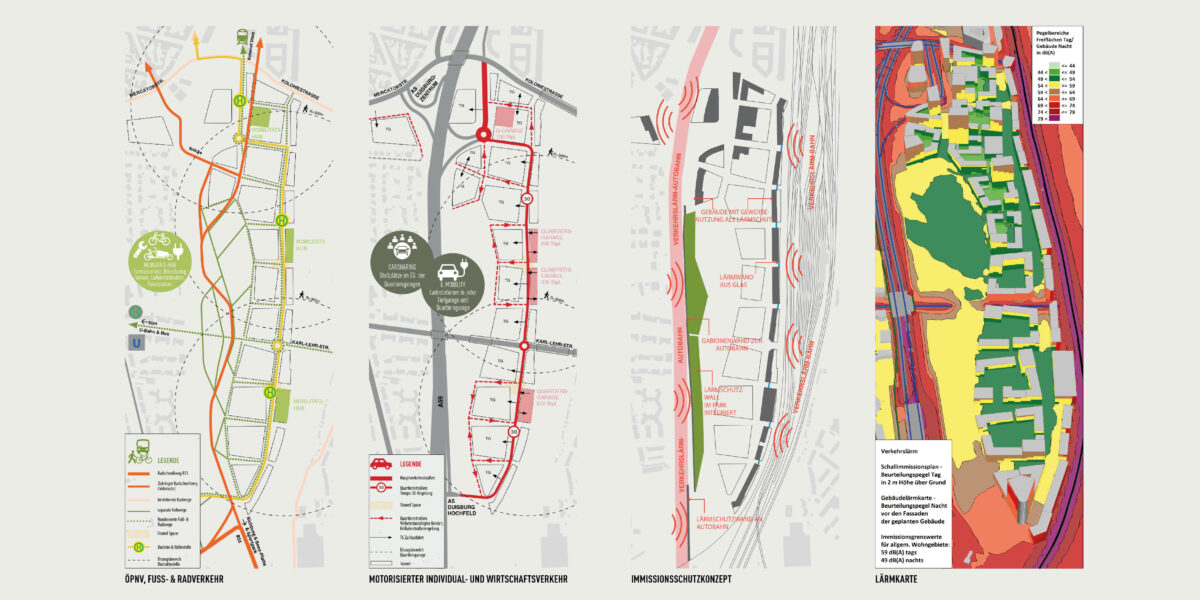 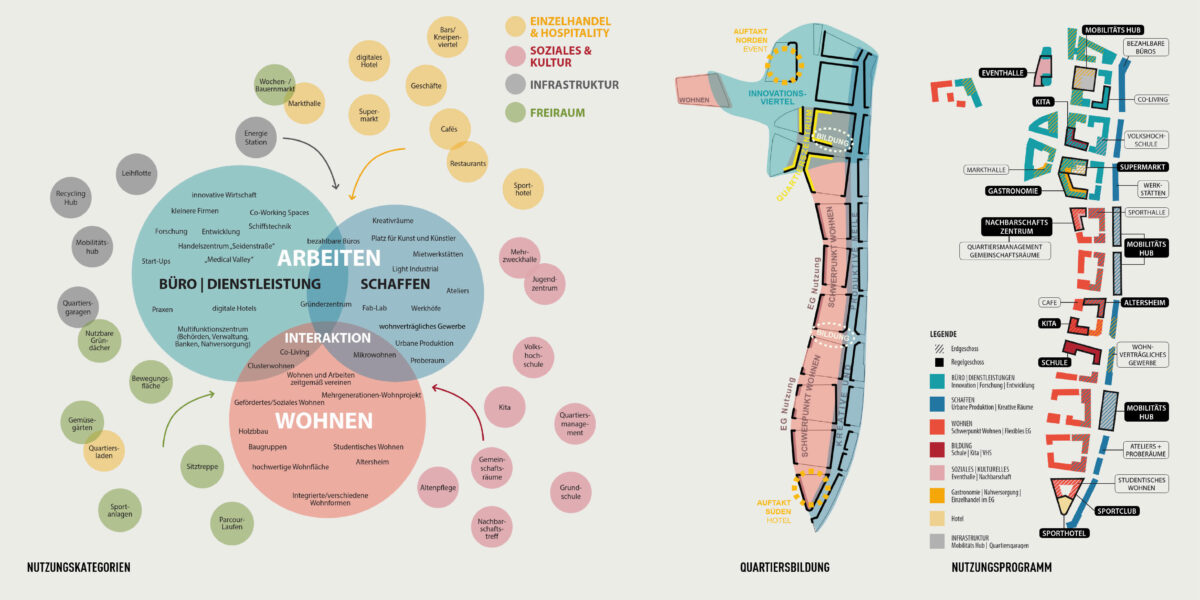 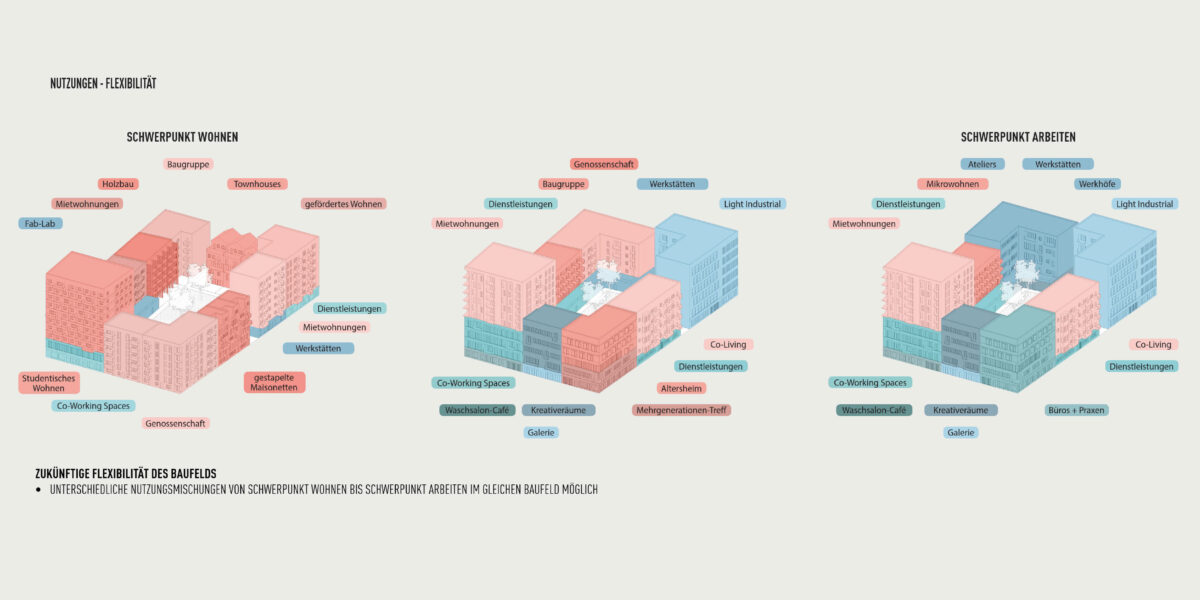 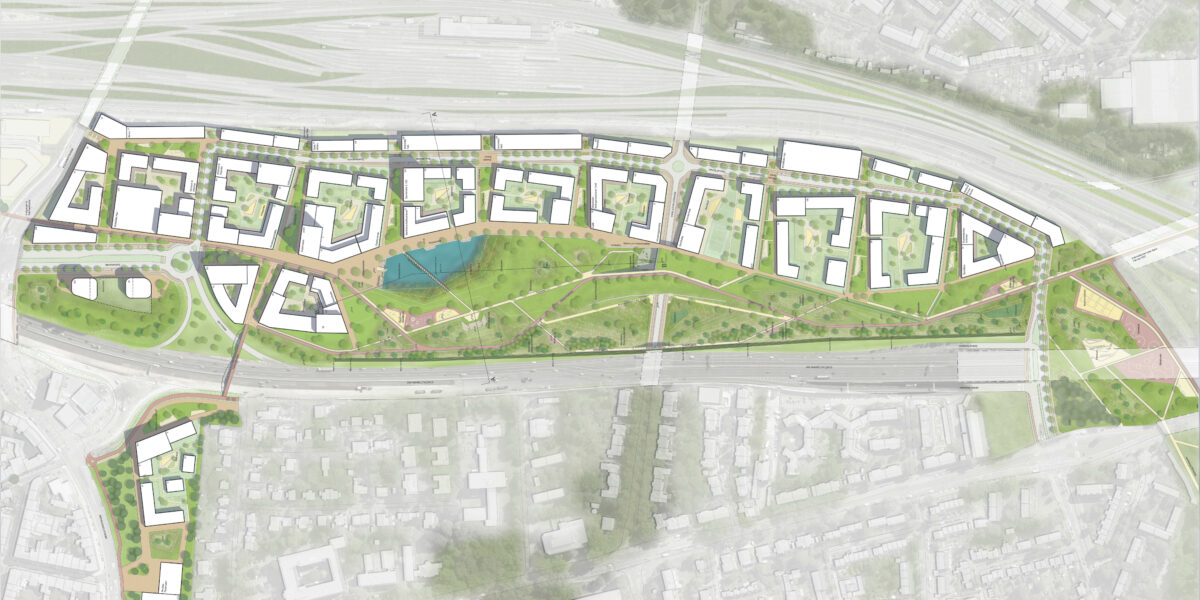 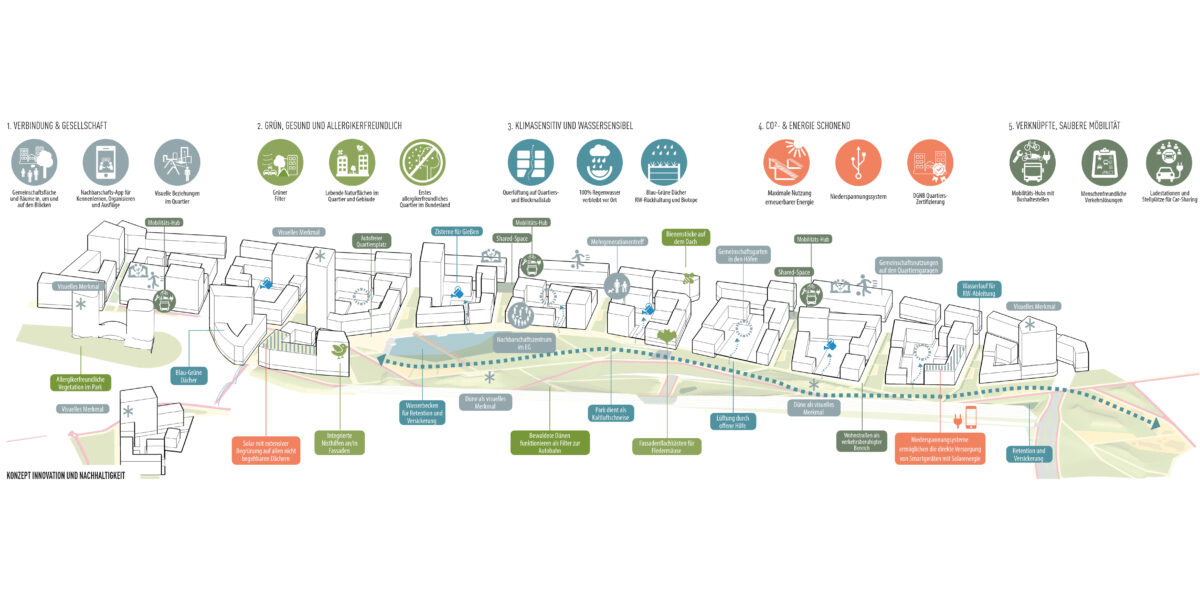 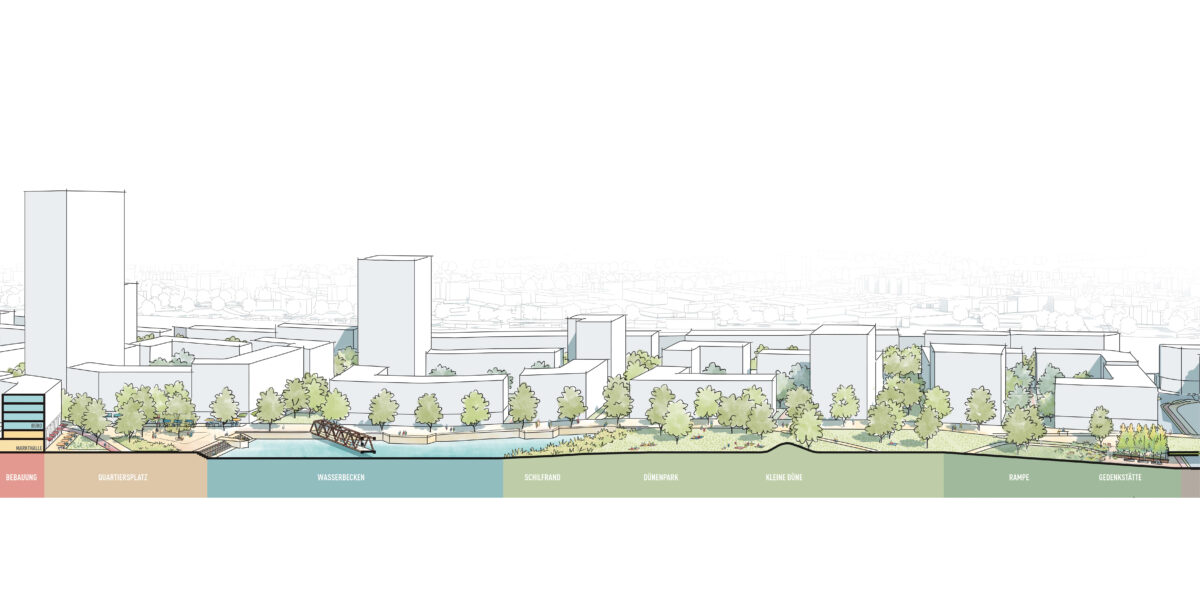 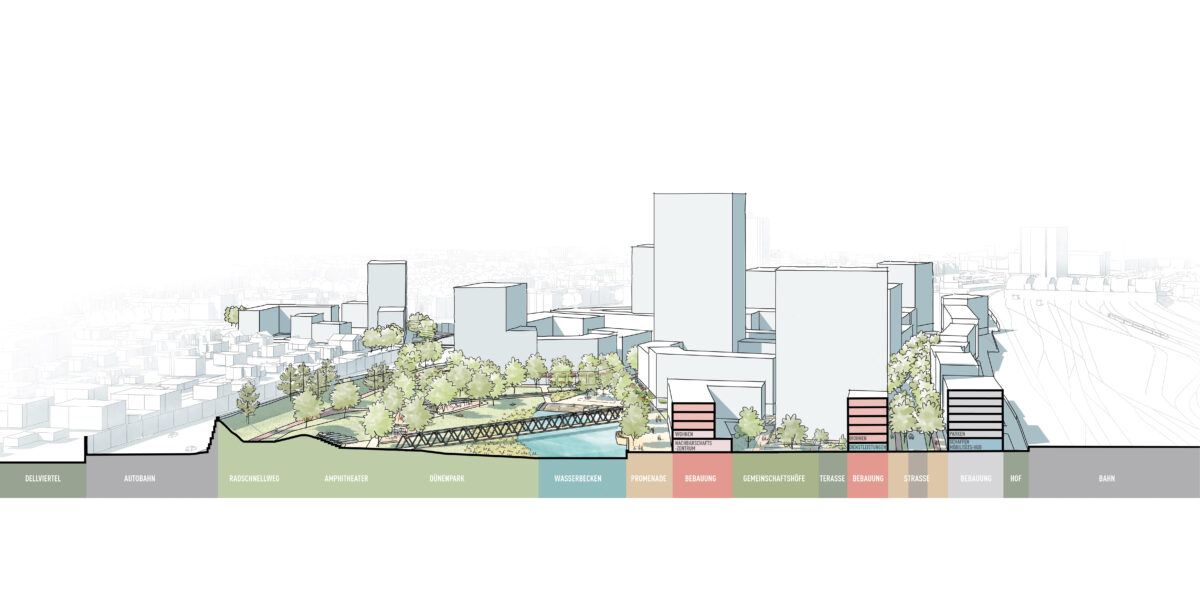 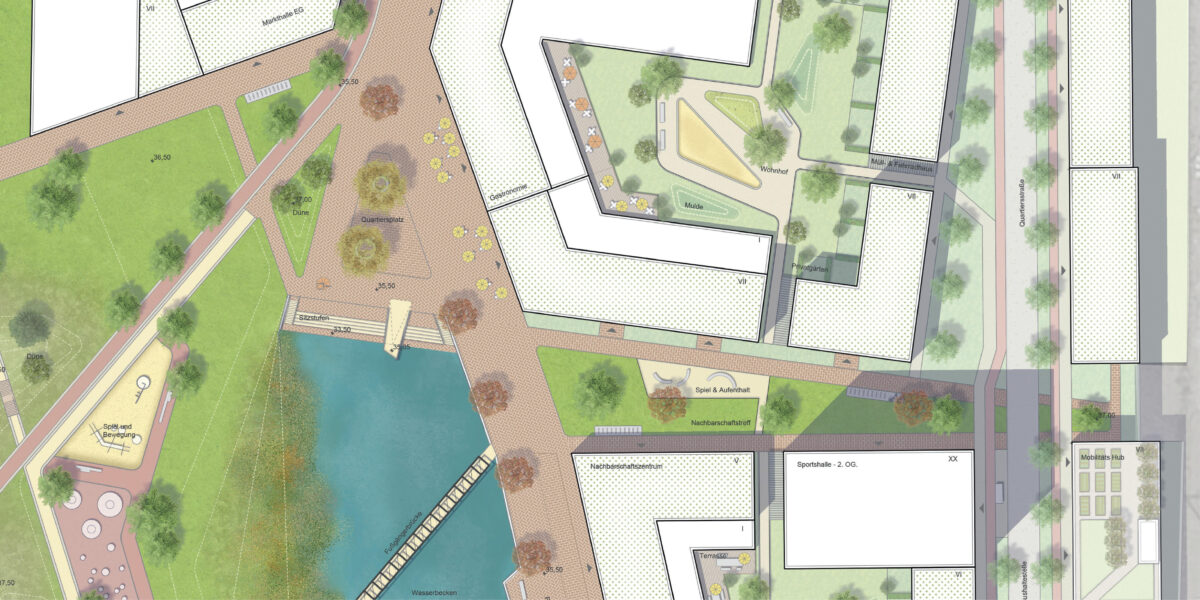 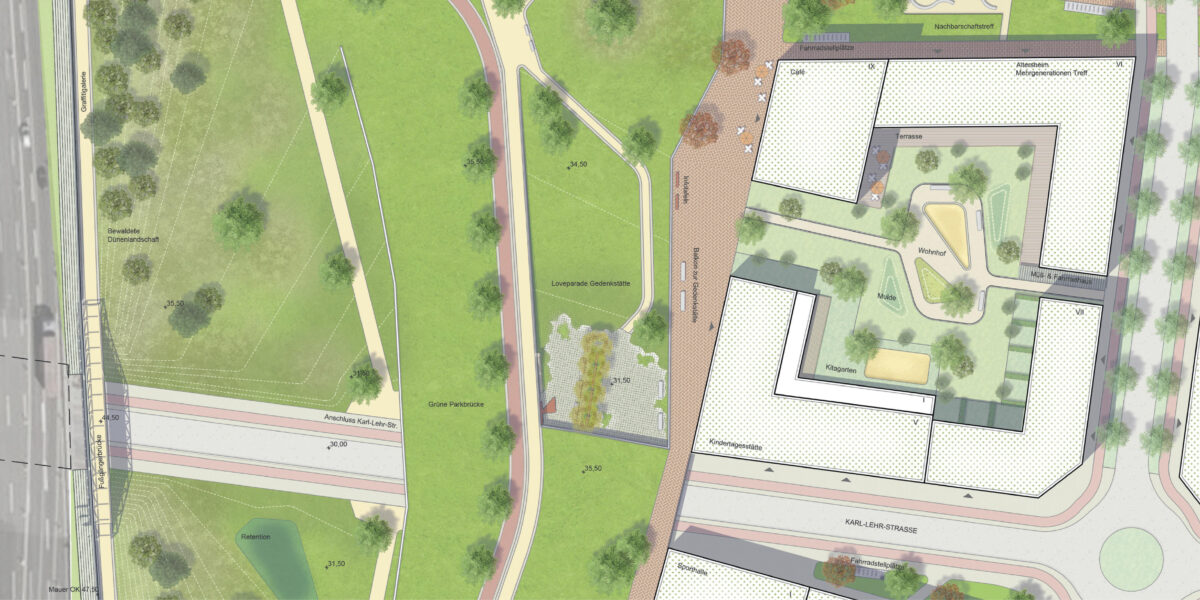 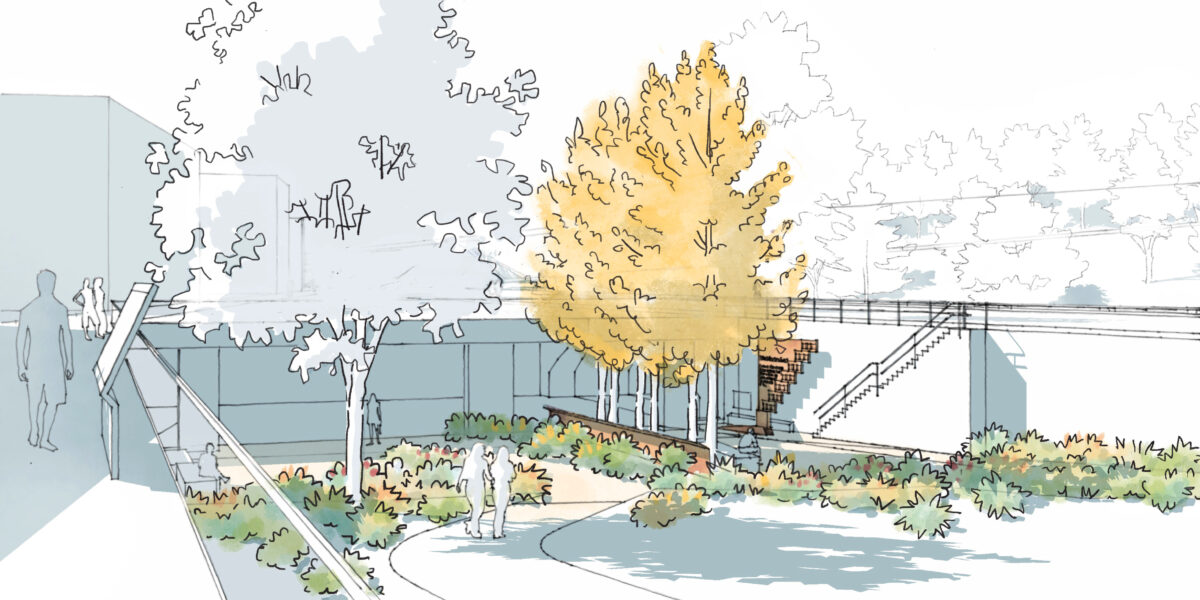 The area of the “Duisburg Dunes”, the former freight yard, is located near Duisburg’s city center, south of the central station. Despite its vicinity to the city center, the 20 ha area is almost completely cut off from the surrounding areas.

Out of operation since 1996, the premises of the freight yard has been the subject of numerous plans. Yet, most of the various plans, such as a stadium, shopping center, furniture market and an outlet center, have not been implemented. In the summer of 2010, the place gained notoriety when dozens of people were killed during the techno event “Loveparade”. In 2018 the location was bought by charitable GEBAG (Duisburger Gemeinnützige Baugesellschaft), which marked the starting point for its development based on an existing master plan by Foster + Partners (2009). This plan provided for a new quarter, featuring a mix of housing and working spaces and included a central green area.

In 2019 a broadly conceived civic involvement procedure commenced in order to hear feasible ideas for the area’s future development. At the same time, in 2020, GEBAG invited seventeen teams to a two-phase competition in order to find the best concept for developing the rural free space. Based on the competition’s result of CKSA and FJP the zoning map and the detailed urban area usage plan will be created and finished by 2023. The project will be implemented by 2032.

The fundamental question about the rural free space competition is how the area can be integrated with the city’s present outline while maintaining a high degree of both quality and independence. What is crucial in this respect is the area’s meaning for the city as a whole and its urban planning context. It is vital for us to decide which usage components form a viable whole.  We also need to reasonably integrate the memorial site for the “Loveparade” disaster within the free space.

There are three superordinate usage categories that shape the character of the new quarter. These are service, urban production and housing. A mixture of these usages is desirable and people should be able to adjust this mixture as needed in the future. In the north there is the innovation quarter featuring office and research facilities. The central station can be reached by foot from here. This area forms an urban complement for Duisburg’s city center. The linear buildings alongside the railway areas in the east are designated mainly for mixed kinds of trade, production and garages for the quarter. A considerable part of the open blocks alongside the Dunes Park is predestined primarily for housing. The ground floor zones of the housing constructions will host small social, educational and service facilities.

The motif of the “Duisburg Dunes” layout is derived from the north-south dynamics of the surrounding transit corridors. The surface modulation of the park responds to different factors such as the highway to the west or diverse points of connection with existing infrastructure.  This creates an eye-catching, dynamic flowing space, which can be especially well perceived while on the move. The footpaths, bikeways and vegetation continuously accompany the interplaying dynamic of the heights. Sophisticated parkways keep offering new perspectives of the park, the quarter and the city’s new skyline.

The topography rises towards the highway, making the Dunes’ landscape a noise protection for the quarter. At the same time, they also serve as a multifaceted space for leisure and recreation. The Dunes also function as a fresh air corridor from which the city center’s climate benefits. Moreover, the new Dunes Park is a crucial component in the city’s open space compound. It links the intra-urban green areas (Immanuel-Kant-Park, Kremer Street, Bönningerpark) with the southern, bigger green areas (Sternbuschweg Cemetery, Duisburg Sports Park and Six Lakes Plain).

Besides the park’s topography, the constructional volumes, too, harmonize with the flowing motions of the place. The space’s edge between the new development in the east and the Dunes Park in the west is also not static but sweepingly curved. Green wedge-shaped streets with housing interlock the park with the bordering development block. These green wedges reach deep into the quarter, creating free space for neighborly meeting points, socializing and playing.

Life in the quarter centers on the city square in the northern quarter. A high-quality urban meeting point emerges here, harmonizing with the bordering water basin and generous areas for playing and moving around. Paying homage to the former railway, a footbridge is laid over the water basin, reminding viewers of the torn down freight yard architecture.  Coming from the city square, pedestrians can saunter alongside the water to the south on the promenade. At the southern end the promenade turns towards the memorial site.

The place of the “Loveparade” tragedy of 24.07.2010 is a key coordinate of the Dunes Park. We keep intact the section of tunnel and ramp where 21 people lost their lives in a stampede. We preserve a section of the tunnel and restore the ramp facility to its original seize in order to make the scene of the accident’s dimensions tangible. A row of new ginkgo trees on the ramp complements the existing plaque by the narrow emergency stairs of the ramp facility. This creates a more intimate space for individual mourning. The promenade above also has informative signs about the disaster.

The “Duisburg Dunes” derive their charm from combining a dense city quarter with the multidimensional Dunes Park and from synthesizing history and spatial sententiousness. In addition, innovative approaches to mobility, rain water and usage flexibility make for a pioneering new location in Duisburg.